Peering through the rain-streaked windows of the train, my first sight of the ExCeL conference centre was of an uninspiring cement box with holes for car-parking punched along one side and a stupid name with jarring capital letters emblazoned on a series of signposts. I huffed, and alighted, and walked long the covered walkway to the entrance.

I had come to register my place in the London Marathon, to pick up my runner's number and race chip and kit bag, to sign my agreement to participate in front of a race official, to agree that On My Own Head Be It.

I was not in a good mood. With three days to go before the race, the city was under water: the seam between sky and land a blur of grey wetness. Rain bounced into muddy rivers everywhere as puddles bulged and spread. Cars splashed, bus windows steamed up and commuter's faces took on a pinched, besieged aspect. I thought about ironing my name onto a wetsuit rather than a running vest.

Walking into the hall I removed my hat and shook out my hair and looked up, to be confronted by streams of purposeful people striding out past me. Each carried a red plastic bag with the race sponsorship logo on it. I scanned their faces as each one went by: how would she do on Sunday? And her? And him? Office-workers and outdoor types, skinny students and apple-cheeked grandmothers -- I gazed at them all, wondering at this carnival of people who would all be pushing along the pavements with me.

Through a red archway was a line of registration kiosks manned by people in branded t-shirts. I took a step forward and trumpets sounded. I started and looked around. Strings soared and swirled. No-one else seemed moved. I paused and got my bearings and listened. Music was blasting out from speakers all around me, exuberantly welcoming the arriving runners as they entered the exhibition. I felt my scalp shiver, and gulped. Sucker, I told myself. Just go and get your number.

At the kiosk I was asked to hand over my passport as identification, and to sign a consent form. An old man in glasses presented me with an envelope, explaining which number went on my vest and which on my kit bag. I smiled and thanked him and turned to go, and as I did so he caught my wrist, and patted my hand with papery, arthritic fingers and said: "Have a good run, love. Have a good fast one."

Next was a row of computer terminals where a woman checked my name for a second time, activated a timing chip and, beckoning me to hand over my bag, sealed it carefully inside before giving it back with a fervent: "Good luck!"

Blinking, I stumbled along and into the exhibitors' hall, to be presented with a wall of colour and scribble, asking me: 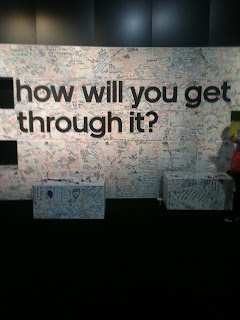 On it, competitors inked messages to one another, good luck wishes and words of love and encouragement spilling across the hoarding. Around us, promotional videos flickered and spun, a blizzard of noise and motion and toned athleticism, exhorting us all to do our best and live the moment while wearing the right brand of sportswear.

I got a glimpse of how Grace must feel sometimes, I think, when trying to process a busy street or noisy classroom, and fled.

In the next room the lines of stalls started in earnest. Tempted to buy a couple of t-shirts and tops, I paused, but then superstition urged me on -- what mortification awaited should I buy official merchandise and then not finish the race. I felt the bruise in my back, the injury like a warning, and walked on.

There were endless stands for clothes and shoes and underwear and sports first aid. One sold only bras, another nothing but injury tape (there were a lot of brave faces in that area.) Here was a large, bright stand advertising the Valencia marathon with a video of smiling people loping along in sunshine. Clusters of people stood around to watch it and collect pamphlets. Around the corner the Dublin marathon stand -- advertising itself as 'friendly' -- was quieter. Around the corner from that, the Munich marathon stand stood empty. A food stand followed, with wall-to-wall power bars, and a drinks stand where confident, good-looking people wore coats marked 'Lucozade Sports Scientists' and approached the crowds with clip-boards and a lot of brass neck.

Underneath a sign proclaiming 'I Am Made Of Determination Not Doubt' a worried-looking woman consulted a map and said to her partner: 'There must be a Nike here somewhere."

Around the next corner I discovered the massage zone -- a giant, fenced-off square of groaning rows of prone bodies swathed in towels. Technicians bent over them with busy hands, occasionally revealing a glistening leg or arm or shoulder. The rising fumes of Deep Heat made my eyes prickle and I moved away.

And then it was the end. Another big red arch leading back outside wished us all good luck. At the last minute a man darted out from one of the final stands and asked me: "Do you want a printout of your body mass index?" Er, no thanks, I told him. He pursued me, and asked: "Do you want to do some stretching?" Er, I'm ok there too thanks, I told him. He eyed me doubtfully and said "Well, ok.. Good luck."

Outside the rain was still pouring and hordes of people were now pushing in past me, the trains disgorging hundreds of scurrying figures come to register now the offices were closing and rush hour had started. I stopped and watched and contemplated the race to come and for a moment felt the purest thrill of fear.

Then I remembered how I would get through it, the message I had scribbled, standing on tip-toes to reach a tiny patch of white among the clamour of messages, the two words that would keep me putting one foot in front of another: 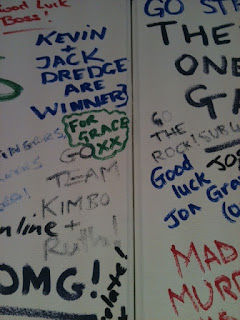 Grace Under Pressure: going the distance as an Asperger's Mum, will be published by Piatkus Books in October