On spoiling other people's fun

I keep spoiling other people's fun.

I'm not sure how it happened. But I think the answer might have the words 'special needs parent' in it.

I've written before on here about enduring spiky interactions with professional comedians who take offence when their jokes about autism cause offence.

This week I tangled with an amateur humourist, but the symptoms were the same: rising nausea, rage and panic. Familiar despair.

I was looking for birthday presents for my baby girl, now no longer a baby quite so much but three years old, lively and smart as a whip. I was browsing in the Playmobil section, looking for cars and trucks -- anything with wheels, really, so that it might stand a chance of keeping up with her -- and reflecting on the difference between my baby and Grace, who at three was already drifting, dreaming, obsessing over the fantastical and far-away.

Then the jester spoke.

To my right a cluster of shop-floor staff were gathered around an art table, trying out a new creative device that was on sale, and comparing their efforts amid giggles and murmurs. One of them -- the only man, young and blonde and confident -- surveyed a colleague's efforts and pronounced: "I'm the artistic one. You're just autistic."

His workmates giggled, and elbowed each other. One said softly, "ooh no" and lowered her eyes and smiled. The jester puffed out his chest a bit and beamed.

I kept walking, round and around the displays, but no longer seeing them. First I felt white shock: spots danced in front of my eyes and my head buzzed as though I might faint. Then my senses rushed back in, led by overwhelming relief that Grace was not with me. Then: outrage. I stopped and looked back. The young man was walking smartly away from me and over to the book section, file under his arm, walkie-talkie in hand, passing out brisk, professional courtesies to shoppers along the way.

So I took deep breaths and lingered, and when the joker passed back my way again I stepped in front of him and said: "Excuse me, don't take this the wrong way but --"

What a ridiculous thing to say. How mimsy, mumsy, middle-aged mousy of me. But I didn't want to go straight into "How dare you" and I didn't want to say "Look here." I wanted to talk to him as me, just me, not one of the Professionally Outraged. I wanted him to listen. In the event though, I don't think he noticed how I prefaced my complaint. As soon as I got to the bit where I explained that I was the parent of a child with autism and that I'd overheard his joke, and that really, it would be sensible to reconsider such statements because they were liable to cause offence -- his eyes got very wide and fixed on a spot over my left shoulder, and his complexion took on a greenish hue. I left him, then, muttering "sorry madam, so sorry madam" over and over, in tones of mortification, to a spot on the wall in between the wooden building blocks and teething-ring stackers.

As jousts go it was terribly unsatisfactory. But then, there is rarely pleasure in this combat. No-one ever says "You know what? You're absolutely right and I'm an idiot and I can see that you're a very nice, normal person and you probably laugh at other jokes and even play the fool occasionally and I'm so sorry." They just look angry, or shout, or look like they want the floor to swallow them up, or like they might cry. And then I'm back to being the po-faced puncturer again.

In the event the store did issue me with a better, fuller apology. The jester's manager telephoned me and talked for a while, using words like "dignity" and "understanding" and "rebuke" and "regret". He said he would send me vouchers, which I said I would spend on Grace.

I'm still waiting for the vouchers. And for the day when it happens again. 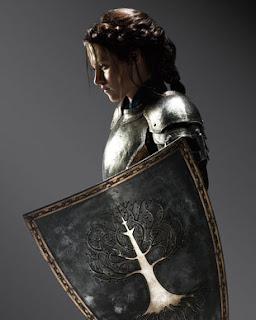