Life's a piece of shit, when you look at it

I have been unwell, and now I'm starting to feel better.

The sun came out today, and the air was warm. Some of the trees are starting to make cherry blossom. There are snowdrops in the back garden.

So I went for a run - the first one this year without my anorak. A marker! Things are Getting Better.

I decided for a change to go along an old favourite route that has been impassable for a while because of the weeks of rain and strong winds. For a long time it has been reduced to bog and broken branches. Today I decided to go along and see if the going had improved.

I'm on down time this week - short, restful runs ahead of the Silverstone half-marathon on Sunday. It's a welcome change from the long on-road routes I've been following to get the miles in in preparation for the London marathon in April. I don't like running on pavements as cars pass by me. I don't like audiences to my red face and wheezy uphill progress. I've missed the trails of the nearby nature reserve and the raggedy path through my favourite fields.

Anyway, the sun was shining, and I was feeling well and things were Getting Better, so I thought it was surely a sign that it was also time to go back to my favourite route.

To begin with all was fine. It was pretty damp, but that was to be expected, and it was nothing I couldn't handle. The fallen trees had all been cut and stacked. There was quite a bit of sawdust to soak up some of the mud.

Several bike trails helped. For the first mile I followed the flattened route laid down by multiple cyclists that led me through the marshiest parts of the path.

The sun went in pretty quickly, but that was ok too. I'd warmed up by then. And it was so nice to be running in just sleeves rather than the jumper and coat and hat I've been puffing around in for the last eight weeks.

Then I got to the top of a rise and looked down into acres of black bog. A horse in the nearby field whickered softly. I'm glad someone's getting a laugh out of my predicament, I thought, and stepped forward.

To begin with, I tried to edge around the side of it, running on tip-toes and hopping from island to island amid the drowned furrows. Very soon I was very tired. But I was too far in to turn back, so I pressed on.

Around the next corner I came to two hikers, stumbling upwards with walking poles and arctic boots.

I feigned a cheery wave and ploughed on past them. As I went out of sight around the next corner I misjudged a dry patch for a wet patch and went in up to my ankles. I said a very rude word very loudly. Small black birds went up like an exclamation from one of the bushes to my right.

At this point I knew that the path went down for another mile and then up for another mile and a half before I would emerge onto roadside. My attempts at hopping between seemingly safe bits weren't working and I was knackered, half-way into what was supposed to be a recovery run.

"Ah, f- it," I told the birds, and ran straight down the middle of the path.

There's something exhilarating about taking the dirtiest, nastiest route. I challenged it to break me. I whooped and laughed as I skidded and jumped and ran faster the dirtier I got.

I was feeling well, and things were Getting Better and even the mud didn't matter.

Then I fell into a dog shit.

(This is an event that would challenge the most talented of writers, so from where I sit it seemed pointless to even try to dress it up. And anyway, you can't polish a turd. So to speak.)

You'd think that among that amount of mud I would be hard-pressed to tell the difference between filth and faeces but reader, I could.

Now I know that many of the routes I enjoy running along are also enjoyed by dog owners. I have on occasion had a teeny weeny grumble about being chased by these dogs, or having to run around their owners clustered across the path having a nice long chat, oblivious to their little darlings' behaviour. I thought I had come to terms with the fact that these people - along with the ramblers who come downhill at me in pairs while I am coming uphill and force me to run balanced on the verge beside them - were just part of the scenery of being lucky enough in run in the semi-rural limits of London.

But finding the Taj Mahal of turds smeared up my leg and splattered - whisper it - possibly across my face - I suddenly felt very different.

I kept going, then slipped again - in mud this time - and found that I was crying. I kept going, snivelling and hoping that no one would see me.

My path home seemed like a very long one. My path to feeling well again seemed even longer. I felt very sorry for myself. I felt very depressed.

Then I skidded again, and this time it was a proper pratfall. My arms windmilled, my knees went in opposite directions. I think I made an involuntary "Ag" sort of noise.

And then I started laughing.

And then the sun came out again.

And I had reached the end of the mud.

And then, after a good strong mile-long finish, I was home.


I am getting better. There will always be shit. The trick is to keep going. And to try not to fall in it. 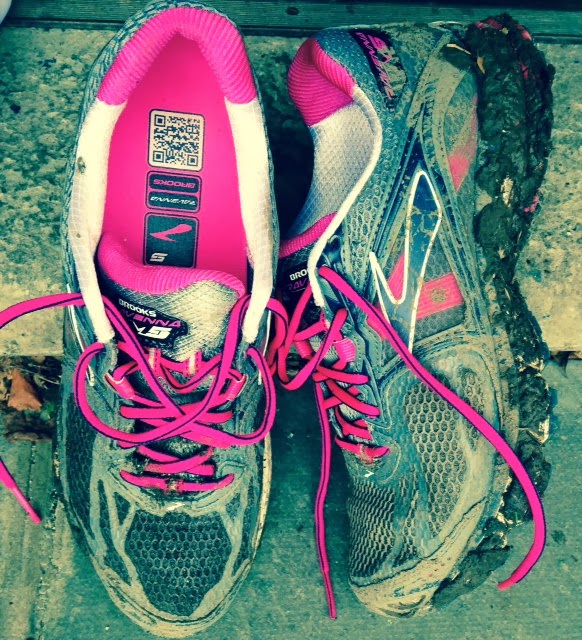 No, I don't fancy cleaning them either

Help me keep running, and help supporting children with autism. Please click here. Your support means everything and makes all the difference.
Posted by Sophie Walker at 16:01