Saying Goodbye to the Tooth Fairy

Grace keeps asking me how old I am.

For the last two days, she has checked and rechecked: asking me in passing, in the gloomy shade of the hall; calling to me from the piano room, in between practising her scales; hovering by my arm as I prepare dinner in the kitchen. She asks me thoughtfully, with a frown, and vaguely -- focusing on a spot over my shoulder -- and directly, fixing me with those dappled hazel eyes of hers.

Each time I give her the same answer. "I'm 41, darling." Then I smile, and hope she can't hear that I am forcing my answers from between gritted teeth.

When I was growing up, the subject of my mother's age was verboten. This was partly because it was irrelevant anyway - my mum, an elegant Julie Christie lookalike who was frequently mistaken for my older sister, has always appeared at least ten years younger than her true age. Nonetheless, she viewed the passing of the years as something to be tolerated with melancholic stoicism, rather than celebrated. Birthdays were for expressing love and appreciation with gifts, not for mentioning -- or God forbid -- congratulating one on reaching a particular age. If that number had to be referred to at all it would be in passing, with a wince.

I never really understood, until last year, when I turned 40, and suddenly did. I could write another book on the way it felt to turn 40, but I think on reflection it's much better that I don't. Enough to say that it was a shock, and predictably brought about much contemplation on what time remains ahead, and how best to spend it. The next year passed, and things got done, and I thought I had stopped worrying and learned not to care.

But age is always a preoccupation in a house with children. The progression to a 'big girl' and nursery school for my baby and Grace's transition to double-digit birthdays -- oh, to have her early years again and do them better for her --  and secondary school mean that it's a struggle to remain detached given the constant markers of time passing.

So when my own birthday came around again last weekend I decided to meet it head on. I invited family and friends out for a celebratory dinner. I bought a new frock and indulged in mild hedonism, swapping household chores and sensible eating for socialising and fizzy wine and lazing in the sun listening to music. This is my birthday, I told myself, and it's lovely.

No-one told Grace. She came back from a weekend with her father (who had forgotten) and was mortified to find cards along the mantelpiece and the remains of chocolate cake in the fridge. She held her face in her hands and apologised abjectly. No need, I told her, just take to me to see that new Snow White film with all the lovely and dangerous-looking women in it. (Charlize Theron, four years younger than me, may be reduced to roles where she sucks the life-force from beautiful maidens, but my goodness she's looking great on it.) Grace cheered up.

But still, she keeps guiltily checking, as though because she missed the event she can't quite capture the moment at which my age flipped over by another year. And then she says, brightly: "Congratulations, Mummy!" It feels like being pebble-dashed in chocolate chips: sweet but painful.

Last night when Grace climbed into bed, she found that a tooth she'd placed under her pillow before departing for the weekend was still there. No tooth fairy had come, despite multiple conversations with me about when she/it might arrive in her absence. Grace came to find me with a doleful expression and a fragment of enamel in the palm of her hand. I felt awful. I had been so preoccupied with being not preoccupied about my age - while simultaneously celebrating it gaily and ever-so-nonchalantly - that I had forgotten my daughter's request.

Abruptly I exclaimed: "I'm so sorry!" Grace's eyes narrowed. "What do you mean, you're sorry?" she asked. There was a pause. I could see disappointment warring with curiosity in her face. We talked, and I explained, and she pondered for a while and then asked hopefully if I'd kept all of her teeth. I explained that regretfully, this was not the case. And I said sorry, again, for being too busy (and self-centred, though I added that bit in my head.) She hugged me.

Last night my daughter, again, grew up just a little bit more. And so - not before time - did I. 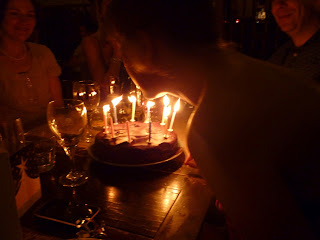